My Name is Ceri and I am from Portsmouth.  I was born with DDH, also known CDH, Congenital Dislocation of the Hip.

Even though I was born with CDH I wasn’t diagnosed until I was 18 months old. This was because my left hip was completely out of the socket, meaning in the newborn examination it was missed as it didn’t click. I was also diagnosed late because the health visitor thought my mum was comparing me to my older sister and was told no two siblings are the same. However, my mum noticed my left leg was a good inch and a half shorter than my right and that I never crawled properly and was constantly falling over. My mum ended up taking me to the GP who agreed something was not right. 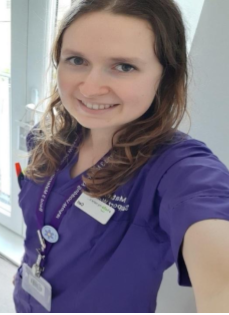 In February 1999, 2 years old, I had my first x-ray which showed my left hip joint to be out, which made my left leg appear shorter when in fact both legs were the same length. I then had another x-ray a few weeks later with a dye injected to get a clear image. I was then admitted to hospital and put in traction prior to my first operation which was to cut a tendon and to attempt to re-seat my hip joint. I was put into the frog plaster for 6 weeks and was informed that I may need further surgery as I had a shallow hip joint. Once the frog plaster was removed, I was taken to theatre for more radical surgery and then put into the broomstick plaster for a further 7 weeks. After this plaster was removed, I had to have a night splint for 6-8 weeks. However, the x-ray showed that the hip had slipped back and I would possibly need further surgery. In July I was back in hospital after having a fall and injured my left hip. My consultant confirmed that I would need another operation after reviewing my x-ray. (Back to square one as my parents put it.) Prior to my operation I had another dye x-ray to determine which operation I would need. In October I underwent a Pelvic Osteotomy to deepen my hip socket. I was then in plaster for 6 weeks. When the plaster came off in December, I also got the screws removed that were holding the bones in place from the Pelvic Osteotomy. Only 21 days after having this procedure, I was walking (with a limp) and climbing up and down stairs. 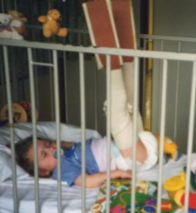 Growing up with CDH was not easy. I had regular x-rays/MRI scans and outpatient appointments. I also had multiple physiotherapy exercises and appointments to attend as well as appointments for hypermobility.  I was in a lot of pain but not all the time. However, I had to limit what I could do which at times was hard as I didn’t always understand why I couldn’t do certain childhood activities, such as running, jumping, trampolining, dancing, horse riding etc, especially when my sister was allowed. A lot of this was because my parents were concerned that if I fell, I could end up back in hospital. Even though my schools were supportive and adapted things for me, I still had to face people, such as teachers, friends and colleagues, thinking I was lying about my hip due to it not being a visible disability, or I had people not letting me take part in activities and left to sit on the side and watch due to fear. However, my parents and sister were there for me and encouraged me with swimming, my physiotherapy exercises and regular walks, which I enjoyed. My mum got me into textiles/dressmaking, which I still do today. Having these hobbies helped me to focus on other things and take my mind of the pain. My mental health did suffer a lot, as when I was little, I lost all self-confidence while going through the operations but over time I was slowly able to rebuild it.

In March 2012 I went for my check up with my consultant and he was very happy with my progress and was happy for me to be completely discharged. He told me that at some point, when I am in my 40s, I may possibly need a hip replacement but until then, my hip should be fine and I could live a normal life but to be careful. However, in September 2013, aged 16, I was back in hospital, in A&E, after stepping over my dog awkwardly and injured my hip. I was given crutches and told not to weight bare.  In February 2014 it was confirmed I wouldn’t need the key hole surgery and that the tear should repair itself. In June 2014 I underwent the shelf procedure, which was successful, followed by traction for 2 and a half weeks then physiotherapy. I also had a temporary wheelchair for when my legs got tired so I could still go out. During this year period, I still went to college and passed all my first year A level exams.

I was only 2years old the first-time round so I don’t fully remember what I went through. However, I do remember the recent episode. My mental health suffered a lot and I hit depression, questioning ‘why me’, ‘will I ever be normal’ and ‘will I ever be pain free?’ I lost all self-confidence and my anxiety got worse. I hit an all time low and didn’t see the point in living if this was going to be my life. However, if it had not been for my college work, textiles or my family and boyfriend, I don’t think I would have got through this. People told me to take a year out of college but I was determined to prove them wrong, which gave me something else to focus on like doing what I needed to do to reach my dream career. 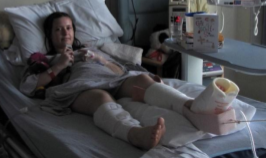 My hip hasn’t just affected me, it has had an impact on my family. My sister was forced to grow up a lot sooner than she should have. My mum ended up developing a back problem, due to lifting me in the heavy plaster when I was little. My parents struggled but they were determined to get me out about and to try as best as they could to give me a normal childhood.

I am now 23 years old and discharged for 2 years and I am basically living a normal life. I still suffer from mild anxiety, especially being in large crowds or being outside my comfort zone but my depression has resolved. I go to gym 4 times a week to carry out personal physiotherapy with my personal trainer, since doing this I have massively reduced the pain and amount of times my hip gives out on me. I am determined to be pain free without medication. I am also working towards my dream job of child nursing while currently working in maternity at Queen Alexandra Hospital, about to start at Southampton General in paediatrics. I can now answer questions I used to always question myself. Why me? – because I believe I can help support others going through similar situations and to be the best nurse I can be by using my experience.