It is not know why the blood supply to the hip becomes affected; it is not reported to be caused by physical injury or a problem with blood vessels in the rest of the body and there are no other childhood conditions which are known to be linked to Perthes.

In most cases, over time, the affected blood vessels begin to regrow, allowing new bone to be produced in the damaged area.  Recovery may take several years as the bone around the femoral head reforms – in a similar, but more prolonged way, to the recovery of a bone following a fracture. 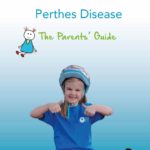 Perthes is approximately 4 times as common in boys as girls and generally occurs between 4 and 8 years of age. Active children tend to be more affected. The first symptom is usually a painless limp, but symptoms can be very subtle, with a mild ache in the thigh or knee not being uncommon.

Medical agreement on the best way to treat Perthes has not yet been reached. Pain relief, such as analgesics, anti- inflammatory drugs and restricting high impact activity are commonly used to alleviate symptoms. Physiotherapy and or hydrotherapy and, potentially surgery to the femoral (thighbone) head are sometimes used. The final aims of such treatments are to help the child have a normally formed hip joint when the grow up.

Steps have also produced a guide to help parents and carers prepare themselves and their child for a hospital admission. Parents of children who are having surgery, followed by time spent in a spica cast, may find the Steps guide Hip Surgery and Spica Cast Care and the short film clips (below) about caring for an older child in a hip spica on the Steps You Tube page useful.

Steps have compiled a short fact sheet about Perthes its diagnosis and treatment which can be downloaded from the Resources below.

Steps is currently working alongside The British Orthopaedic Surgery Surveillance (BOSS) Study, a nationwide study to report the incidence and outcomes in rare orthopaedic diseases. The initial focus of this long term, pioneering study is  on Slipped Capital Femoral Epiphysis and Perthes’ Disease.

Find out why we need more research into Perthes:

The effects of Perthes into adulthood are still very much unknown. Doctors have very limited information on how many adults require a hip replacement (if any) and if the disease has had long term consequences on their daily activities.