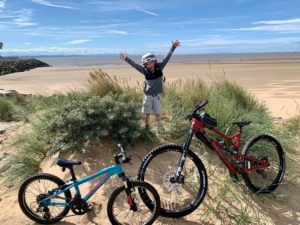 When Fred was 3 he started complaining of pains in left leg, at first we thought he’d pulled a muscle. He was a typical 3 year old boy running and jumping off everything. He kept complaining, sometimes of pain in his left knee and sometimes he had a limp.

We had several trips to the doctors, drop in and Alder Hey. After about 3 months of being misdiagnosed with a hip infection, irritable hip, he was diagnosed with Perthes Disease.

We were told it was so severe he would need an operation straight away as his movement was so bad. They put us on the waiting list at Alder Hey and told us to come back in 6 weeks for his pre-op. His pain went from bad to worse very quickly. He didn’t sleep, sometimes he couldn’t put his left foot down with the pain. After a few trips to Alder Hey we were given strong meds to give him at home but these would just knock him out. Although he needed the pain relief it was a horrendous to see him like this.

We went for his pre op to be told they didn’t want to do the operation on someone so young so, for now and after a second opinion at Alder Hey, we were told we just had to see what happens. We were heartbroken not knowing what was going to happen, what we could do or how long this would go on for. Dr. Perry has been amazing and with us every step of the way. The support from him has got us through. Dr. Perry monitored him closely and Fred has never had an intervention.

It had a huge impact on our lives in the early days, we had to totally change the way we lived our lives, we were limited to what we could do and where we could go. Simple things like going for a walk, to parties, who we visit, where we go, how much travelling etc. We have to consider how much walking is involved. There were very few parties he could go to as they’re normally soft play, football or trampoline parks.

We had always been an active family and this has changed in terms of us being active together. We couldn’t just go to the beach for a walk with the dog. Fred could walk but not for any length of time as his leg would get sore. Generally we used a pram but he hated going in it. He would as long as we explained to people about his hip and why he was in a pram. His Dad would put him on his shoulders but the position of his hip, when on his dad’s shoulders, meant his hip would stiffen really quickly and get sore.

For myself and his Dad it was just heartbreaking seeing your baby in so much pain. It’s the pain that affected us the most. Knowing as parents your child is screaming in pain and there’s nothing you can do to help. You feel it in the pit of your stomach. It wasn’t going to beat us, and we’d do everything in our power to help him and we have. 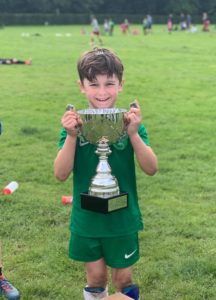 We are so lucky to have support from our amazing family and friends and Lily has always been the best big sister anyone could ask for.

Looking back now I think people just didn’t understand, it’s a rare disease and the other problem was on good days Fred looked like there was nothing wrong and he could do anything any other child could, but it was the fall out afterwards that his body couldn’t cope with and he would suffer terrible if he did too much. People didn’t see the bad side though. Very few people have.

We only put positive pictures on social media and hid away with the curtains closed when he had a bad day until he’d recovered. We would try to shelter him from people seeing him. We certainly didn’t show how bad it got so I suppose it’s hard for people to understand without seeing it.

Fred is now 7 1/2 and doing amazingly well. The blood supply returned to his hip about 18 months ago he now has significant regrowth ( nearly 50%) and Dr. Perry is really happy with the shape of the regrowth too.

To the naked eye it’s hard to tell which side he has Perthes and that’s down to hours of physio, massage, stretching and exercises. We’ve worked as a team since day one. I’ve done his daily exercises, soft tissue release, massage and physio. His Dad has worked on his strength with training, teaching him to ride a bike (something he’d never been able to do in case he fell on his hip) he now goes on over 20km bike rides with his Dad without complaining of any pain. He now plays for Marshall’s, a local football team in Liverpool ( again, something he’d never been able to do and was so desperate to play) his Dad takes him training on Wednesday evenings and he plays matches every Saturday and he’s loving every minute of being on the pitch!

The only other thing I’d like to say is Fred himself is amazing. He doesn’t let anything hold him back. Of course he still has bad days but they are few and far between.

We’re so ridiculously proud of him with how he’s dealt with it and we’ll always be grateful to our amazing family, friends and Dr. Perry that have got us through.

Fred’s our hero, our Perthes warrior.

We are looking to make improvements to the Steps website and we would be really grateful if you could spare us a few minutes of your time to help us to answer a few questions.

Please answer honestly. This survey is anonymous and we appreciate constructive criticism.

Invalid email address
Click here to take our survey
Thanks for subscribing! Please check your email for further instructions.