Julian and his family live in Sweden, this is their story of daughter Elisa’s diagnosis and treatment for DDH. Inspired to keep Elisa entertained during her treatment by making up stories, Julian has since written a children’s book, The Squirrel’s Tail, to give other families a moment of joy in their struggles and help parents talk about these difficult issues with their children.

When our daughter Elisa was a toddler, she started to walk with a terrible limp. We were initially just fobbed off by our paediatrician with “That’s how toddlers walk”. But parents do know best (most of the time) so we insisted on getting X-rays and – to our dismay – she was diagnosed with Developmental Dysplasia of the Hip (DDH), a condition where the “ball and socket” joint of the hip does not properly form in babies and young children. This meant that her hip socket was the wrong shape and too shallow and that her thigh bone was totally dislocated from it.

We were referred to an orthopaedic specialist in the children’s hospital. Elisa was a first child, had a breach birth and came from a family with hip problems – all risk factors, we discovered, for DDH. We also found out that DDH is very easy to fix in babies with what is known as a Pavlik harness, but that it is much more complicated for older children. After more X-rays and MRIs, we were recommended a closed reduction which involves manipulating the thigh bone (femur) under general anaesthetic to put it back in place within the hip socket. The whole area is then set in a plaster cast called a hip spica to keep the thigh bone and the pelvis rigid.

Fast forward four months and three closed reduction operations later, our daughter’s hip was still completely dislocated. This might have been the result of several factors, such as the conservative approach to treatment, the severity of hip shallowness or ligaments in place pulling the leg out of its socket. And there were now signs of osteonecrosis – this occurs when part of the bone (in our case the femoral head or “ball”) does not get blood and dies. This might have been due to the thigh bone being physically forced into a position restricting blood supply. Whatever the reason for this, we had totally lost confidence in the treatment, the hospital and were desperate for a solution.

We got fantastic support from Steps, they offered moral support, having many “DDH mums” among their volunteers, but also had very informative digital brochures, contact lists and even put us in touch with other parents. We consulted five surgeons, who recommended five completely different treatments. We were left with the horrible feeling that the right choice might bring normality and health to our child, while the wrong one might damage her even further. At the time, we were living in a one-bedroom flat, my wife was heavily pregnant and our daughter had started limping around between treatments. This was easily the worst period of my life. We felt so fragile and powerless, bursting into tears at work and despairing about what to do.

Eventually, we decided to go with the most experienced surgeon at Great Ormond Street Hospital and hope for the best. After yet more X-rays and MRIs, he recommended an open reduction and a Salter pelvic osteotomy. 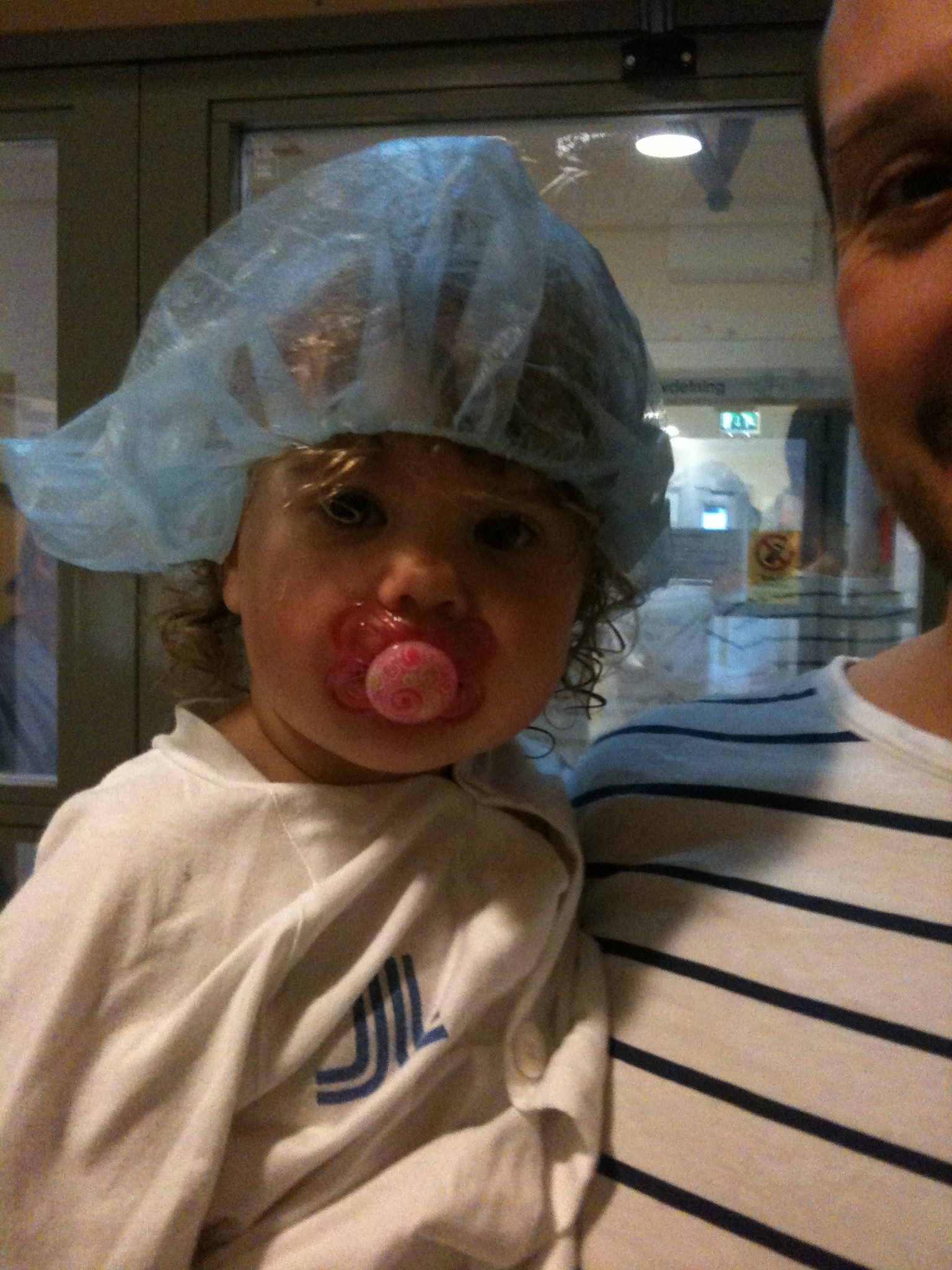 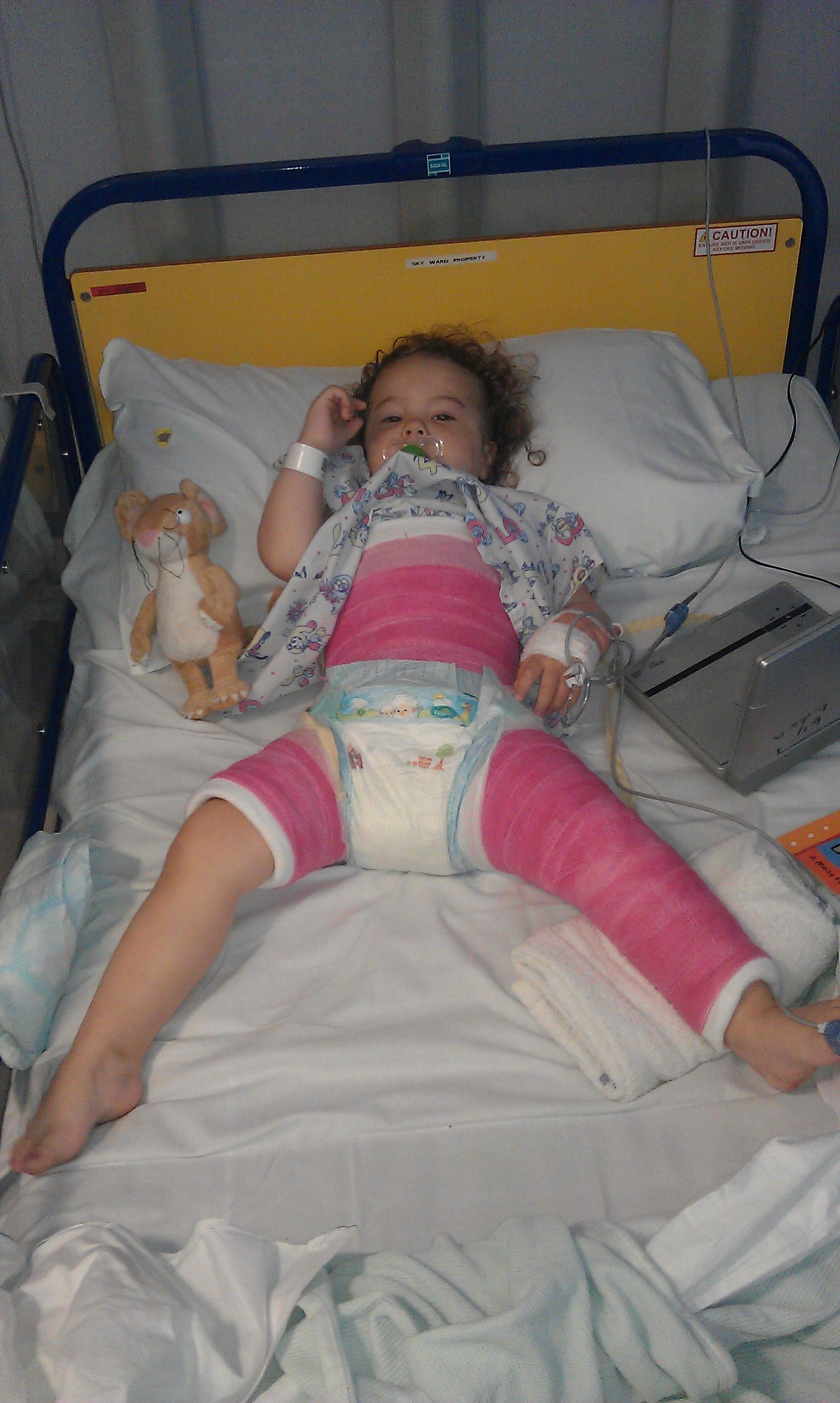 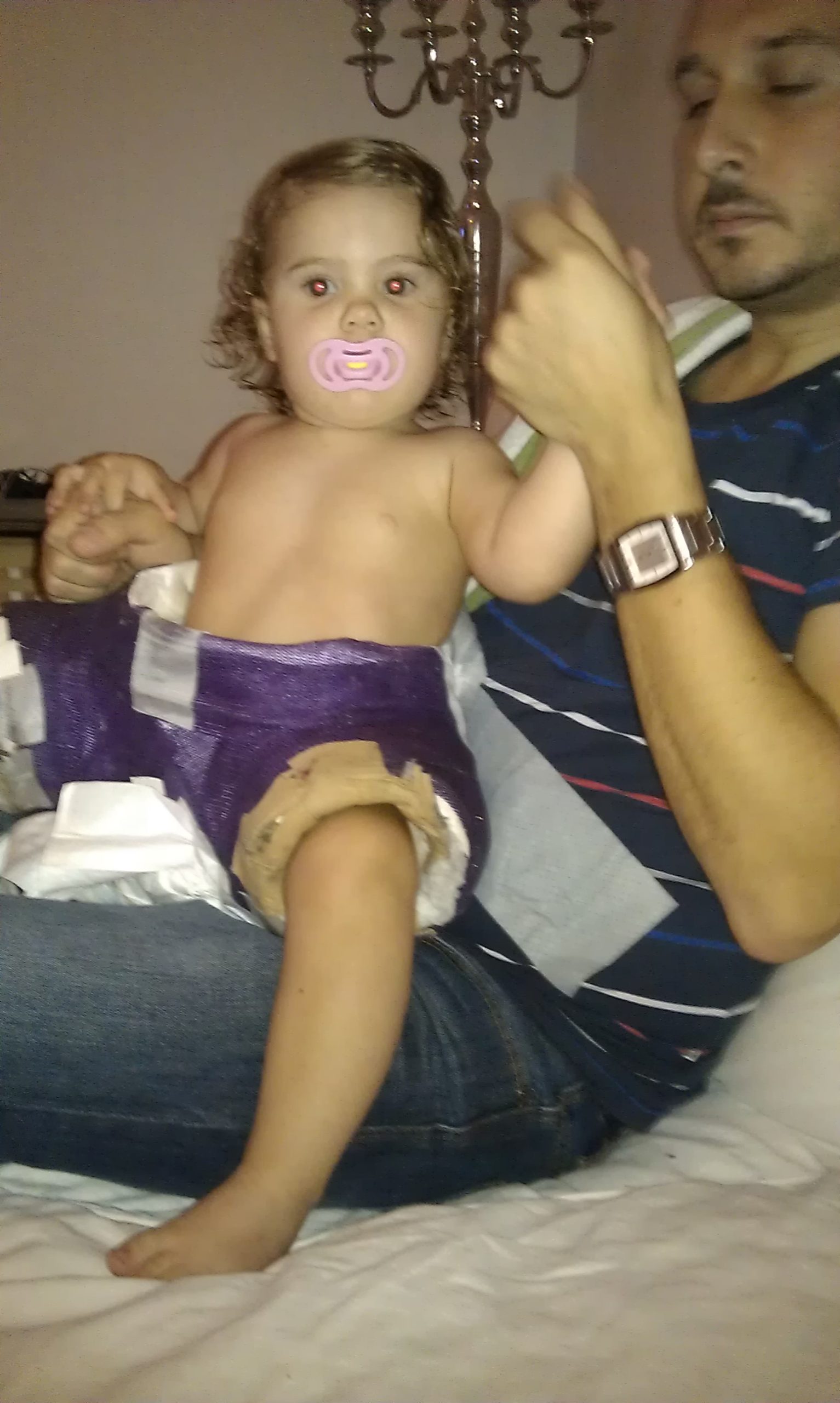 An open reduction is used if the closed reduction fails or the child is too old for it. The surgeon makes an incision in the groin and clears the hip of any tissue that prevents it from going into the joint.

A Salter pelvic osteotomy is a form of surgery to correct a hip socket that is too shallow or has the wrong shape. The surgeon makes a cut on the outside of the hip and realigns the pelvic bone so that the socket can cover the ball of the hip joint better, and fixes it in place with surgical screws and a plaster cast.

After surgery, Elisa was put in a cast (called a bilateral one and a half hip spica cast) from her ankle on one side all the way to her armpit, ensuring full stability of the pelvic area. The only areas she could still move were her arms and shoulders and the other leg from the knee down. She was very heavy and had to be carried everywhere. Keeping her busy was tricky, so we bought a huge beanbag to prop her up into a more or less sitting position. We had to borrow a new car seat and pushchair and relatives even knitted her lovely leg-warmers that she could slip on over her feet. We also found a wide table and tried to keep her amused with stories, colouring books and jigsaw puzzles. I was lucky enough to be able to take six weeks off work to literally carry my daughter around and keep her busy.

After six weeks, the cast came off, and they removed the screws holding her adjusted hip joint together. Due to the imminent birth of our second child, my wife couldn’t be there. Elisa’s leg muscle mass had drastically reduced this time, and she had to rediscover her legs. It took a little while for her to start moving comfortably, initially crawling, but quickly re-discovering how to walk and eventually getting less and less tired.

This was undoubtedly the worst period of our lives, but as parents of a sick child, you somehow don’t focus on yourself or have time to feel sorry for yourself. You just focus on the problem at hand and make the situation as comfortable as possible for your child. If you had a magic wand, you would instantly take upon yourself their sickness and pain. But you can’t so you just put your head down and deal with the issues as they come. There’s a horrible feeling of powerlessness and complete loss of control. But having a strong partner and a supportive family of course is a great help.

Yet even in these times of darkness and despair, there are always moments of joy and hope. Our determined daughter was always so positive and refused to let a full body cast hold her back. She somehow learned to crawl around the room, using her arms and foot to push herself around.

So that’s our story. Elisa now has a healthy-looking hip and plays basketball but still has to do physio exercises to stay strong and might well need surgery again as she grows. But we’re doing fine. 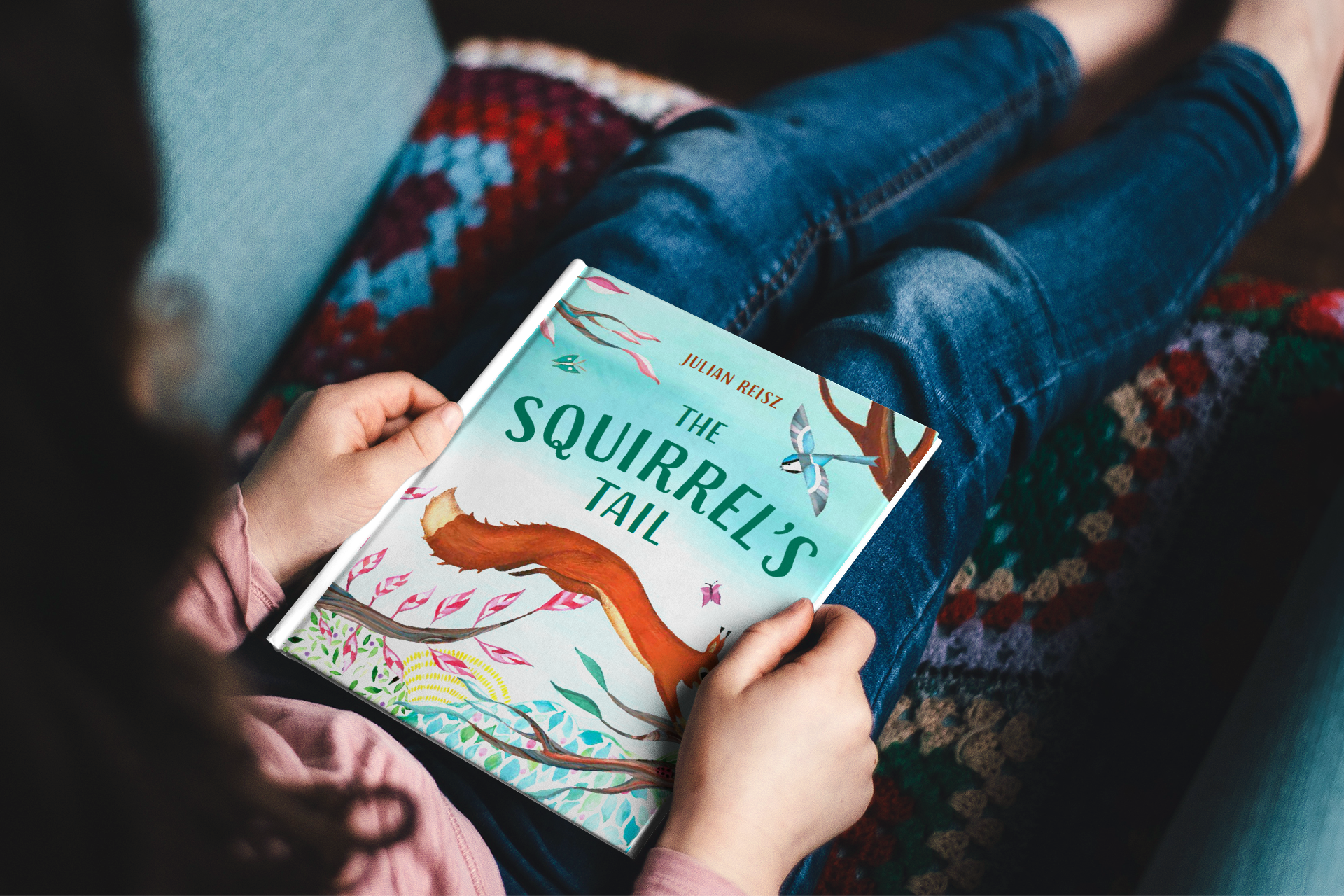 During her treatment, Julian wrote a story for Elisa about a bouncy little squirrel who has an accident and loses its tail, which he has now published. Julian hopes that The Squirrel’s Tail can give other families a moment of joy in their struggles and help parents talk about these difficult issues with their children.

Between 22 and 30 November 2021 Julian is donating £4 from every book sold to Steps Worldwide and you will receive a free copy of The Squirrel’s Tail colouring book to keep your little ones amused during cold and rainy winter afternoons.

Find out more about The Squirrel’s Tail here