Harriet was diagnosed with DDH when she was 3 and a half years old. A late diagnosis after numerous trips to the GP who brushed off Harriet’s limp as a toddler walking/running with a leading leg which isn’t uncommon. The original visit to the doctor was as a result of family and friends commenting on Harriet’s limp, something we didn’t see because to us she is perfect in every way. Other than her quirky little run which all toddlers have anyway, there were no obvious symptoms, no pain or discomfort.

We did get referred to a children’s physiotherapist after a third visit to the GP, who assessed Harriet’s hip movements and found there was a ‘clunking’ sound. At this point, there was no mention of DDH, even after a lengthy appointment at physio DDH was never mentioned, although it was discovered Harriet had one leg longer than the other – which explained the limp. We were sent away with a built-up insole for Harriet to wear in her shoes and also with a referral to Orthopaedics to monitor the discrepancy in her leg lengths. 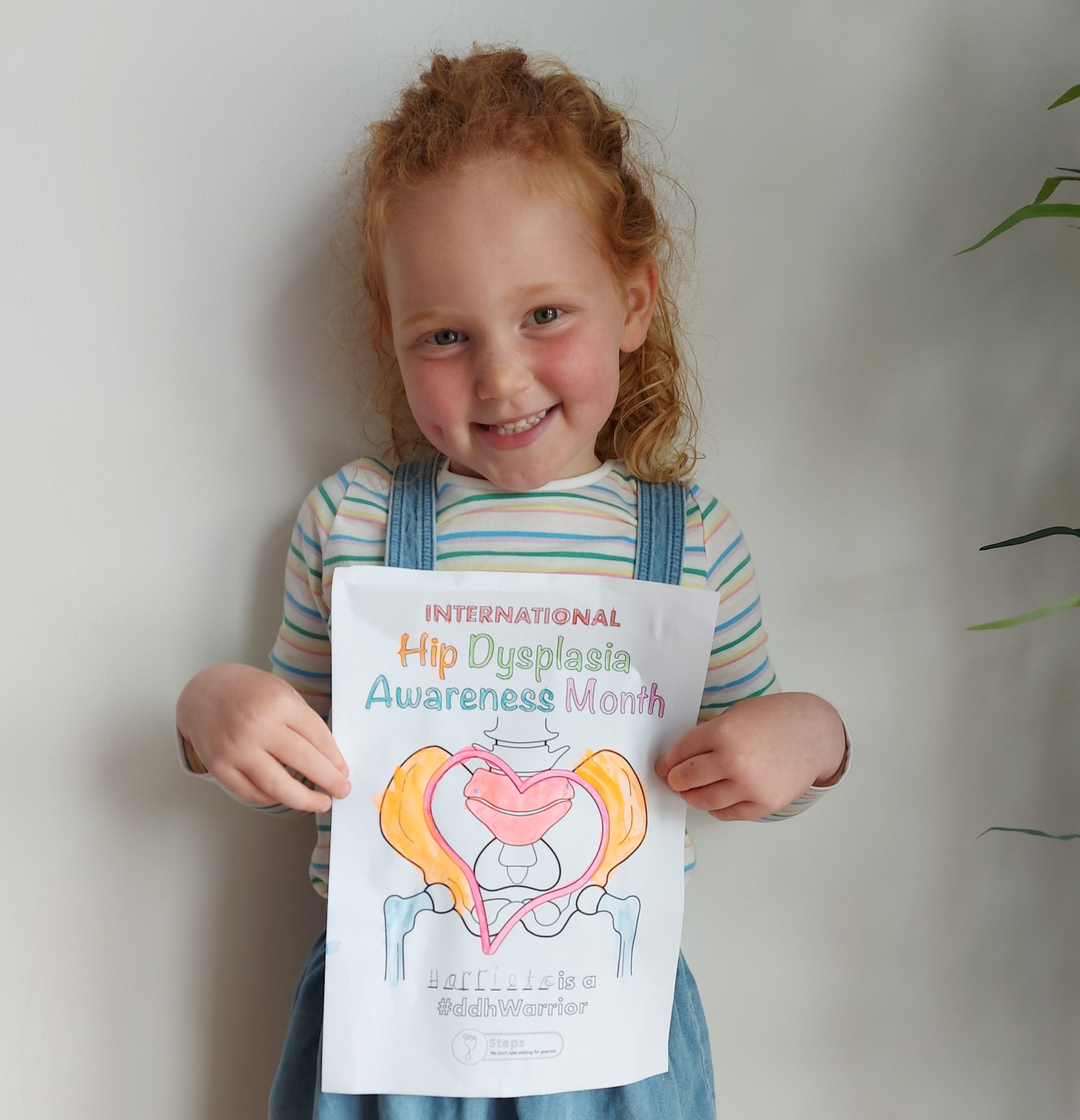 When the appointment came round to see the Orthopaedic Consultant, he took one look at her x-ray and diagnosed DDH, and she was immediately placed on the urgent waitlist for an operation to put right the damage caused. Harriet underwent an open reduction surgery on her left hip six weeks later. It was a very anxious time waiting for the operation and we did reach out to STEPS who sent us some information through the post, we watched videos and had very reassuring conversations over the phone with the STEPS team.

We really panicked as we didn’t know how she would adjust to her life being a little different, no running, jumping, play parks, soft play etc. We just really hoped she wouldn’t be sad. The resilience children have is absolutely incredible. She smashed being in a wheelchair and spica casts. She did go to soft play and play with sand on the beach, she has so many fond memories of that period of time, as do the rest of our family.

Since then, Harriet has gone from strength to strength, she has been having a checkup and x-ray every 6 months after her operation with her consultant we trust implicitly. This should be extended to once a year soon. It can still be a bit tough as her parents, worrying about trampolines and bouncy castles along with any potential falls. Harriet knows to be careful and believes she has magic in her hip now, which her consultant put there during an operation to help fix her hip when it didn’t work properly. She has quite an impressive scar which she loves to tell people the story about how she has it and about the magic that is in there now.

We don’t take walking for granted anymore – and to help give back to Steps for their help and advice Harriet’s dad (John) has been fundraising from friends, family & colleagues by committing to run the Great North Run 2021. So far clocking up 800 miles since the start of 2020 – which included the Great North Run 40 and Great North Run Solo events which took place in place of the 2020 main event. These efforts can be followed on the Just Giving Page which captures the runs when they’re recorded (https://www.justgiving.com/fundraising/john-mcgill11)