Noah is a very talented footballer. He was kicking a football before he could walk. At the age of 6 he started playing at Everton’s Development Centre as well as playing for two other teams and playing futsal.

Summer 2019 Noah started to complain of pain in his feet and knees but due to the amount of physical activity and his age, we put it down to too much football or ‘growing pains’.  The pains were only there for a couple of hours and after some rest and a hot bath, Noah was back to his usual cheeky self.

As the summer was drawing to an end, Noah started to complain of pain in his groin and yet again, we put it down to a possible groin strain. We did get him checked out by our doctor who also thought it was a groin strain based on the amount of football he was playing and him being a very live wire. He told us it could take several weeks to heal fully. As the weeks went on Noah complained every now and then about the pain, we thought he was getting better until one night in November. One wet cold night in November 2019, Noah was asked to play a year above his age group in a football tournament.  Dad took him along and he was playing great, he fitted in well with the older kids and did not look out of place. The manager asked if Noah would like to join their team, which Noah gladly agreed to. The team won the tournament and Noah scored the winning goal! What a night it had been for him and his new team mates, he was ecstatic.

The following morning Noah could not walk and was complaining about the pain in his groin. We thought it was best to not take Noah to the hospital as it was all over the news that A&E departments were over run and on red alert due to a V&D bug that was going round (what we now know was possibly the start of Covid -19). We are very lucky where we live to have a local children’s walk-in centre.  We decided to take Noah there to be assessed. After a 4 hour wait, we were seen by a nurse and we explained what had happened to Noah after he’d played football the night before. At first, she agreed with the groin strain and was about to send us home. Until she realised this had been going on for a couple of months, she explained that it might be more than a groin strain. She went on to say that she’d never seen it before, until a couple of months ago her daughter’s friend had something similar. She said that she was going to move Noah’s hips in a circular motion to see if what she was thinking could be a possibility.

She began the test and Noah screamed out in pain, to which the nurse was very apologetic. “Ill be back in a minute” she said, “I need to ring Alder Hey, and I think they may want to see you”. What seemed like a lifetime was probably only a couple of minutes. The nurse was right the hospital did want to see us that same night. We were given a letter to take with us to Alder Hey and there was an orthopaedic doctor waiting for us on our arrival at the hospital.

Noah spent the night in hospital having blood test, x-rays and an ultrasound all of which were inconclusive. Noah was allowed home the next day and booked in for the end of that week to have an MRI Scan. The MRI Scan confirmed Noah had Perthes in his left hip.

Mr Bruce, Noah’s Orthopaedic Specialist, explained that the best chance of Noah having a full recovery was to have a Varus Osteotomy due to his age (nearly 8). We as a family were absolutely devastated by the news as was Noah himself heartbroken at not being able to play football. By now he was really struggling to walk and needed to use a wheelchair.  To watch our cheeky active little boy, go from playing football every day to hardly being able to walk and needing a wheelchair, really broke us, but we are a strong family and together we knew that we could get through this.

However support and friendship came when we least expected it. We thought we were the only ones going through this. We had never heard of Perthes before and did not know what to do. The news that Noah had Perthes had spread around the football team that he had just left to play for the team of older boy. The parent of the child that had taken the space in the team made by Noah, contacted us and told us that their son also had Perthes. We went from feeling alone to having this amazing support from his parents and fabulous sister. The boys have become inseparable and have a fantastic friendship I am sure we will all be lifelong friends.

Noah was due to have his operation on April 11th 2020 but Covid 19 had put a stop to all non-urgent surgeries.  We were devastated his operation was cancelled and Noah’s pain was getting worse he was not in a good way. However, Thursday 23rd April we received a phone call from Mr Bruce telling us he had managed to reschedule Noah’s Surgery for Monday 27th April, (this was his older sister’s 13th birthday) it was all very quick, Noah had to go for Covid test and isolate until the day of his operation.

Noah’s operation went well, but due to Covid restrictions it was a very difficult and upsetting time for us as a family. He was not allowed visitors and could only have myself to support him in the hospital, while his dad, brother, and sisters where at home. At least we had ‘FaceTime’. The doctors and nurses were truly amazing.

Noah had a ‘Spica Cast’ on for 8 weeks, which was very difficult being stuck at home, both dad and I were exhausted. Being on ‘lockdown’ no visits from family or friends and three other children that needed home schooling as well as working from home was a huge challenge, but we got through it. What was already a very difficult situation had been made worse due to Covid and the restrictions of ‘lockdown’. We were admitted back into hospital on June 9th to have the cast removed. Noah stayed in hospital for 5 days as he required Hydrotherapy and Physiotherapy to help get him moving again.

Today Noah is recovering well, we are waiting for an appointment for his next operation to have the metal plate removed which will hopefully happen very soon. Of course Noah has had his down days but the positive mental attitude that he possess is amazing. He is very determined to not let this stop him and more determined than ever that he will be back playing the sport he loves very soon!

We are very grateful for all the support we have received from our family and friends. Noah is our superhero a true ‘Perthes Warrior’. 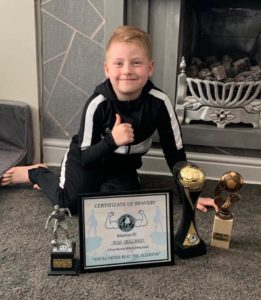 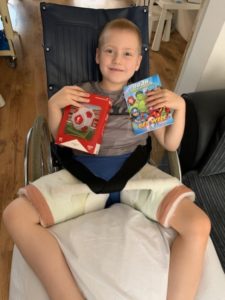