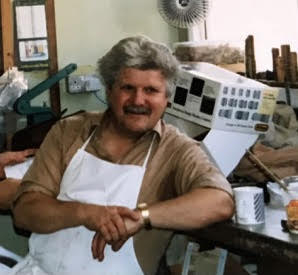 Clifford Morgan was a prosthetic technician at the Nuffield Orthopedic Centre in Oxford. Here, his niece Kelly Homer pays tribute to him and a long career using his skills to help others.

On the 15th of February, we said goodbye to my Uncle Cliff it was a lovely service full of wonderful memories. For me, Cliff was more than just my Uncle he was also my work colleague and I had the privilege of working with him for 15 years at the Mary Malbrough Center at the Nuffield Orthopedic Center in Oxford.

Cliff was a prosthetic technician who specialised in leatherwork. He was, without doubt, a master craftsman, there was nothing he couldn’t do with a piece of leather.

Cliff worked at the centre for over 30 years before retiring in 2001. He worked with many Prosthetists and technicians over the years and was always keen to pass his knowledge on to them, I have no doubt this is still used today.

Cliff had a connection with the younger patients at the centre due to contracting Polio as a child himself. He would always work his magic on their appliances, he was very clever.

Many of Cliff’s colleagues paid tribute to him including Michael O’Bryne from Opcare: ‘Cliff indeed was an expert in the field, I suspect one of the best leather workers in the industry and we all learned a lot from him. Goodness knows how many patients Cliff helped walk again over the years.’

He will be missed dearly by his family and all who knew him.