Home » Blog » If the shoe was on the other foot

If the shoe was on the other foot

Ryan’s story of buying shoes as a child and as an adult with clubfoot.

Who knew buying footwear would be so difficult????

I was born with Bilateral Congenital Talipes Equonvarus, a condition that causes my feet to turn inwards and downwards. My grandparents were quick to notice when I was born, my right foot was more curved than my left foot, and is also larger in size than my left.

Going from a baby to a teenager, I already had 2 or 3 operations, the first was when I was 6 months old; my feet were cut open and pulled round, with bolts going through my legs and my feet to support its structure. I also had to have the tissue removed on my right foot in primary school.

My left leg was longer than my right by roughly 2 cm, which meant through life I waddled, it was not until I was in secondary school that I had my right leg tendon lengthened so that I could walk in a less unstable way.

By having these operations and being in casts, finding footwear to be comfortable in was almost near impossible. Luckily, I had grandparents that were very supportive and took the time to help me find footwear.

I used to go up to town with my grandparents, we went from a shoe-to-shoe shop, I used to try on loads of pairs of shoes. Some looked nice, but then my right foot did not fit when the left did, or both feet fit snug but the side of the shoes was weak, so they would not last due to me walking on the side of my feet.

I used to get upset and fed up with looking and trying to find shoes that were comfortable, suitable and was a decent price. The majority of the time we used to get shoes that were kind of ok just so I had something to wear for school or day-to-day use.

There came a point when looking for and buying shoes, became too much emotionally, mentally and financially, so we made an appointment with the NHS to ask if we could get the shoes specially made. This involved having appointments, putting my feet in moulds, which were sent off for trainers/ shoes to be crafted. These trainers were large and bulky but were comfortable which was the main thing. Unfortunately, the bullying increased when I wore these due to the size of them and because they were not the right colour for school, which caused the bullies to pick on me because they felt they could also be in their own trainers.

From my memory, I think I had them for about 6 months before we returned them to the NHS as the bullying made me mentally ill, it was affecting my education, and I went back to looking for footwear uptown again.

Due to the shape of my feet, there’s a bulge on the top of my foot where the tongue of the shoe would rest. Meaning that having a shoe with laces would not be suitable, as tying the shoelaces would cause pressure on my ankles which would lead to more pain. The only shoes that I had more luck with and were comfortable were slip-on shoes and shoes with Velcro.

Fast forward to being an adult and still living with the condition, buying footwear is still difficult. If anything it’s even more difficult.

Working life has been difficult due to the type of work I have been in, and trying to find footwear that would support me while I earned. Throughout my life, I’ve worked in pet shops, zoos, safari parks, nightclubs, restaurants and been abroad travelling as a cameraman and coordinator. All of these roles required preparation, for example being a cameraman and coordinator in Tenerife, due to the warm weather I had to ensure I found shoes/trainers that not only fit but were breathable.

Between 2018 and 2022 on my right foot, the bone on the side has begun coming out more (see below) this is due to my foot slowly moving back to its original position.

This means trying to find comfortable footwear is becoming even more difficult, but one positive outcome, is working at West Midland Safari Park, they have a mandatory uniform the same as many companies, but they know of my condition and they allowed me to purchase my steel toe-capped boots, they then reimbursed me. This kind gesture allowed me to take my time in trying on different boots and not feel embarrassed by asking the park to request various sized boots.

Buying footwear has been difficult throughout the various stages of my life and of many others who have clubfeet, but we do find the courage to deal with the impossibility of finding the perfect pair. By walking the full length of Jurassic coast in May/ June 2022 I hope to highlight more about the issues that adults face living with clubfeet such as the emotional, mental and physical side of life. 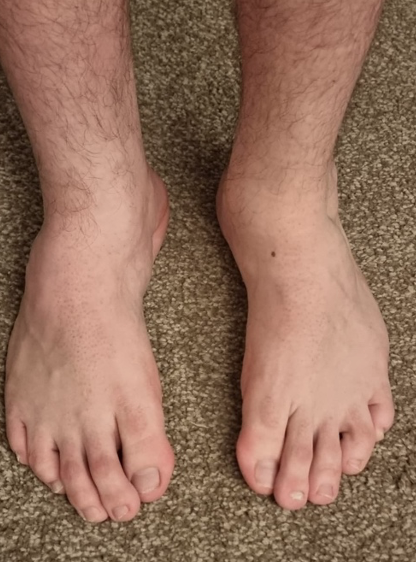